If you want to learn to navigate throw away the map!

This week’s post comes to us from Dr Chris Loynes. Chris is Reader in Outdoor Studies at the University of Cumbria. He recently worked as an educational adviser on the Learning Away Initiative. He is also a member of the Nature Connections network and chair of the European Outdoor Education Network.

Navigation using maps has been a ‘core skill’ of outdoor learning since it’s early days. I heard myself saying ‘I’d be lost without a map’ at a conference in Australia in conversation with local practitioners including an aboriginal national park ranger. He laughed saying ‘I always know here I am’. A Finn, an Australian and I decided in that moment to experiment. What kind of experiences could we facilitate in the wild travelling without maps?

The Finn let his students undertake a self-reliant journey across the tundra in winter. They thought it could be done in five days, might take ten and planned on fifteen. In the end it took twelve days. Using natural navigation such as the sun, stars, wind direction and river valleys as guides and staying in camp when it was a blizzard or no visibility, they headed east until they reached a catch feature, a north south road, where they were picked up.

The Australian let his students loose in the bush with the rule that they must always stay on a trail. The bush was dense and the trails few, all of them bringing the group to one exit from the forest or another. The group emerged after three days and a walk they enthused about for weeks afterwards.

I managed just a few hours in a Lakeland woodland. Two groups set out to create a walk with natural markers as waypoints. They then turned a description of the route into a poem that they then taught to the other group. Each group would then try to follow the path of the first group. It worked a treat – even with lines involving ‘sunlit birches in autumn colour’! – it was a day of sunny periods and birch was the dominant tree!

A key for all of us was a change in our attitudes to time as a safety factor and to space in that we needed to know where our groups were. In each case risk assessments focussed on the skills, equipment and experience of the group so that they could mange space and time effectively for themselves. However, we also noticed a significant change in the nature of the experiences reported by the participants. The focus on nature was considerably enhanced – including noticing more and the apparent development of new knowledge, understanding, skills, behaviours and values. I decided to experiment further.

For four years I let two groups of students (n = 126) loose on a Lakeland fell they didn’t know with the instructions to explore the fell. One group had a map and compass each. The other went without. The research took the form of a participative enquiry with the students paying attention to the experience they had, interviewing each other about their experiences, identifying themes and then reporting back to the other group for comments and discussion.

The contrast between the two groups and the consistency over the four years was startling. The participants with maps and compasses tended to stay together, planned their walk in advance aiming for features present on the map but not their line of sight, tended to keep moving, used human features in the landscape such as walls and paths as handrails to navigate, aimed for the summit of the fell, stayed away from others, commented on the views beyond the fell, remembered conversations with others and were back on time.

The participants without a map or compass tended to go alone or in twos and threes, they headed for natural features they could see, used natural features such as streams and rock outcrops as handrails, avoided human features, stopped often to do things – a sit spot, a swim in the tarn, climb a boulder or a tree, watch wildlife, talked to others they came across, rarely gained the summit, commented on the views of details of the fell and wildlife seen and were back on time.

This second group were exploring the fell in ways that were not normal to British hill walking culture or to them as Outdoor Studies students so the difference is perhaps even more remarkable. It is also interesting that both approaches managed time effectively. This suggests that the participants without a map had a temporal sense of the place they were exploring as well as a spatial one and used this to ensure they returned punctually. Only one student ever got ‘lost’ and she had a map and compass!

It is interesting how much of the conventions about how to be in the fells seemed to be embedded symbolically in the map and compass. Going to the top, appreciating the views, planning ahead, achieving a predetermined outcome, being self-reliant, staying together and knowing at all times where you are on the map were all vividly present in the data.

Of course there are educational benefits in both approaches. However, if your concern is with a connection with nature then abandoning maps would seem to have something to recommend it. The participants spent most of their time paying attention to and engaged in the material nature and events they encountered, were more immersed, sometimes literally, in their surroundings and quickly developed a utility in managing space and time using the concrete landscape rather than an abstract map.

This research took place in the mid nineties. At about the same time a local outdoor centre that also used the same fell with its primary school groups had independently adopted the mapless approach to exploring though this time with staff accompanying the pupils. They also found that maps and the skills involved in navigating with them ‘got in the way’ and that the pupils were more engaged in the landscape and the activities without them. They also noted that ‘it was interesting how good they were at knowing how to get back’. 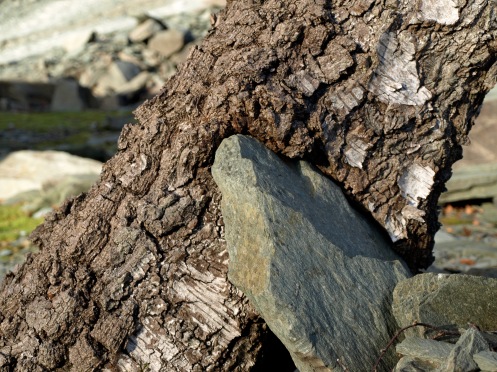 Since then the development of outdoor experiences for younger children in primary schools, sometimes through approaches such as Forest Schools, has led to a widespread exploration of places without maps, the making of maps and the use of maps of many different types. This research suggests that it is also possible to maintain a mapless and nature focussed approach with older students and on bigger and remoter challenges. If this is so, and if the nature focussed outcomes are prioritised as educationally valuable, then it is important that one approach to safety that relies on maps and the skills involved in using them does not become so established that it makes it difficult to use different approaches. After all, these examples – mostly- did not get lost (and alternative safety systems took care of this). You might say, like the ranger, that they had come to ‘know where they were’.

This entry was posted in Natural Environment and tagged Navigation. Bookmark the permalink.

1 Response to If you want to learn to navigate throw away the map!